The manufacture of ammonia is crucial for the world’s agricultural industry for from it all fertilizers that contain nitrogen are produced. 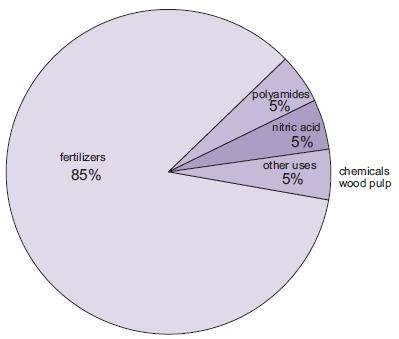 Figure 1 The uses of ammonia.

An increasing amount of ammonia, although still small compared with other uses, is used as a concentrated solution in combating the discharge of nitrogen oxides from power stations.

Ammonia ranks second, to sulfuric acid, as the chemical with the largest tonnage. It is being increasingly made in countries which have low cost sources of natural gas and coal (China and Russia account for ca 40%). The largest plants produce about 3000 tonnes a day and there are plans to build plants that produce 4000-5000 tonnes a day, which would mean that the total world output could be managed with 100 such units. Current production is:

The increase in tonnage of ammonia made is just keeping pace with the increasing world polulation and with its increasing standard of living.  It is expected that the demand for ammonia will increase to nearly 200 million tonnes by 20181.
1.  International Fertilizer Association, 2014.

The manufacture of ammonia from nitrogen and hydrogen takes place in two main stages:

a) the manufacture of hydrogen

b) the synthesis of ammonia (the Haber Process)

The manufacture of hydrogen involves several distinct processes. Figure 2 shows their sequence and the location within an ammonia plant (steps1-5). The converter used to make ammonia from the hydrogen is also shown (step 6). What occurs in each of these steps is described below the figure.

(a) The manufacture of hydrogen

Hydrogen is produced from a variety of feedstocks, mostly from natural gas, coal or naphtha. The ways in which hydrogen is obtained from these feedstocks are dealt with separately.

(i) The manufacture of synthesis gas

Whichever way the methane is obtained, it will contain some organic sulfur compounds and hydrogen sulfide, both of which must be removed. Otherwise, they will poison the catalyst needed in the manufacture of synthesis gas. In the desulfurisation unit, the organic sulfur compounds are often first converted into hydrogen sulfide, prior to reaction with zinc oxide. The feedstock is mixed with hydrogen and passed over a catalyst of mixed oxides of cobalt and molybdenum on an inert support (a specially treated alumina) at ca 700 K.

Then the gases are passed over zinc oxide at ca 700 K and hydrogen sulfide is removed:

High temperatures and low pressures favour the formation of the products (Le Chatelier’s Principle). In practice, the reactants are passed over a catalyst of nickel, finely divided on the surface of a calcium oxide/aluminium oxide support contained in vertical nickel alloy tubes. The tubes, up to 350 in parallel, are heated in a furnace above 1000 K and under a pressure of ca 30 atm. This is an example of a tubular reactor.

Secondary steam reforming reacts oxygen from the air with some of the hydrogen present and the resulting mixture is passed over a nickel catalyst. The steam and heat produced from the combustion reforms most of the residual methane. Among the key reactions are:

The emerging gas from this net exothermic stage is at ca 1200 K and is cooled in heat exchangers. The steam formed from the water used in cooling the gases is used to operate turbines and thus compressors and to preheat reactants.

Some recent designs use waste heat from the secondary reformer directly to provide heat for the primary reformer.
At this stage the gas contains hydrogen, nitrogen, carbon monoxide and carbon dioxide and about 0.25% methane. As air contains 1% argon, this also accumulates in the synthesis gas.

It takes place in two stages. In the first, the high temperature shift reaction, the gas is mixed with steam and passed over an iron/chromium(III) oxide catalyst at ca 700 K in a fixed bed reactor. This decreases the carbon monoxide concentration from 11%:

In the second stage, the low temperature shift reaction, the mixture of gases is passed over a copper-zinc catalyst at ca 500 K. The carbon monoxide concentration is further reduced to 0.2%.

The carbon dioxide is released on heating the solution in the carbon dioxide stripper). Much of it is liquefied and sold, for example, for carbonated drinks, as a coolant for nuclear power stations and for promoting the growth of plants in greenhouses.

The last traces of oxides of carbon are removed by passing the gases over a nickel catalyst at 600 K:

This process is known as methanation. A gas is obtained of typical composition: 74% hydrogen, 25% nitrogen, 1% methane, together with some argon.

If naphtha is used as the feedstock, an extra reforming stage is needed. The naphtha is heated to form a vapour, mixed with steam and passed through tubes, heated at 750 K and packed with a catalyst, nickel supported on a mixture of aluminium and magnesium oxides. The main product is methane together with oxides of carbon, and is then processed by steam reforming, as if it was natural gas, followed by the shift reaction.

If coal is used, it is first finely ground and heated in an atmosphere of oxygen and steam. Some of the coal burns very rapidly in oxygen (in less than 0.1 s) causing the temperature in the furnace to rise and the rest of the coal reacts with the steam:

The gas emitted contains ca 55% carbon monoxide, 30% hydrogen, 10% carbon dioxide and small amounts of methane and other hydrocarbons. This mixture is treated by the shift reaction.

The main problems of using coal includes the large amounts of sulfur dioxide and trioxide generated in burning coal and the significant amounts of other impurities such as arsenic and bromine, all of which are very harmful to the atmosphere and all of which are severe poisons to the catalysts in the process. There is also a massive problem with disposal of the ash.

Synthesis gas gas can be produced from biopmass.  The process is outlined in the unit on biorefineries.

(b) The manufacture of ammonia (The Haber Process)

The heart of the process is the reaction between hydrogen and nitrogen in a fixed bed reactor. The gases, in stoichiometric proportions, are heated and passed under pressure over a catalyst (Figure 3). 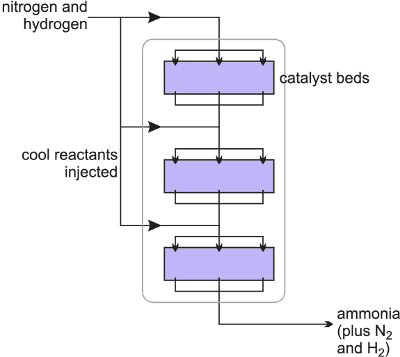 Figure 3 A diagram illustrating a conventional synthesis reactor (a converter).

The proportion of ammonia in the equilibrium mixture increases with increasing pressure and with falling temperature (Le Chatelier’s Principle). Quantitative data are given in Table 1. To obtain a reasonable yield and favourable rate, high pressures, moderate temperatures and a catalyst are used.

Table 1 Percentage, by volume, of ammonia in the equilibrium mixture for the reaction
between nitrogen and hydrogen at a range of temperatures and pressures.

A wide range of conditions are used, depending on the construction of the reactor. Temperatures used vary between 600 and 700 K, and pressures between 100 and 200 atmospheres. Much work is being done to improve the effectiveness of the catalyst so that pressures as low as 50 atmospheres can be used.

As the reaction is exothermic, cool reactants (nitrogen and hydrogen) are added to reduce the temperature of the reactors (Figure 3).

The ammonia is usually stored on site (step 7) and pumped to another part of the plant where it is converted into a fertilizer (urea or an ammonium salt). However it is sometimes transported by sea (Figure 4) or by road, to be used in another plant.

The original catalyst that Haber used was Fe3O4, which was reduced by the reactant, hydrogen, to iron. Much work was done to improve the catalyst and it was found that a small amount of potassium hydroxide was effective as a promoter.

Recently research has been focussed on finding even more effective catalysts to enable the process to take place at lower pressures and temperatures. Ruthenium on a graphite surface is a promising one.

The Haber Process is of such importance to our lives that it has figured in three Nobel Prizes in chemistry, all to German scientists, over a period of nearly 90 years, a remarkable record.

The first was given in 1918, to Fritz Haber, the chemist who developed the process in the laboratory. The second was to Carl Bosch, whose brilliant engineering skills made the process viable on a massive scale, but who waited until 1931 for his award.

In 2007, Gerhard Ertl was awarded the Prize for his work on catalysis of gaseous reactions on solids. Among the wide range of reactions he studied, he gained evidence for the adsorption of nitrogen molecules and hydrogen molecules on the surface iron and that these adsorbed molecules dissociate into atoms. These atoms then join up in stages to form the ammonia molecule. It must be remembered that the conditions used in these studies (at less than 10-10 atm) are very different from the conditions used in industry, ca 150 atm.

The whole process of producing ammonia from methane is summarized in Figure 5. If coal or naphtha is the feedstock, extra processes are needed. Naphtha is converted into methane and oxides of carbon before going into the primary reformer and thence to the shift reaction. Coal is also converted into hydrogen and carbon oxides and this mixture then undergoes the shift reaction.